Demonetisation eating our Jobs : IT employees

Forum for IT Employees (FITE), a union mobilising employees in IT hubs such as Bengaluru, Chennai, Hyderabad and Pune against “forceful resignations” and “unfair terminations”. 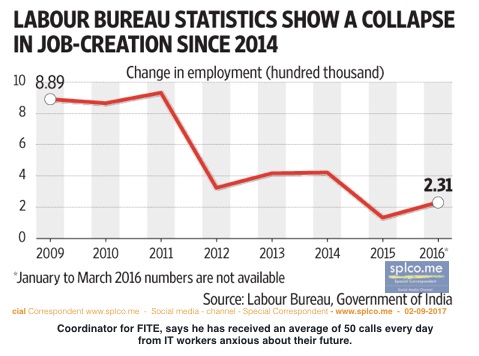 Bjp Government Demonetisation resulted reduction of dividend by RBI., loss in GDP ., GSV Increased in trade gap and employment . The worst affected is construction Industry and Analysts say second one is IT.

Beginning 2017, a number of IT majors, including Wipro, Infosys, Tata Consultancy Services and Tech Mahindra, have shed thousands of workers across India.

Employment solutions companies expect an annual layoff of 200,000 jobs over the next three years. A McKinsey report says nearly half of the IT services workforce—the $150 billion industry employs 3.9 million people—will be “irrelevant” over the next three or four years.

Faced with shrinking options, a section of IT workers are forming unions, poring over labour laws and making the rounds of government offices, courts and ministries. “I don’t know much about labour laws,” says Sunil Kumar, waiting his turn outside the commissioner’s office for the fifth time in three months. “But I am ready to go to the high court. The company has to take me back or give me a compensation for life”.

Since March, 31-year-old Rajesh Natarajan, the Bengaluru coordinator for FITE, has received an average of 50 calls every day from IT workers anxious about their future.

IT professionals have remained outside the purview of labour laws such as the Factories Act, Industrial Disputes Act and certain state-specific regulations because these cater only to the rights of “workmen” or those without any executive powers.

But in hearing after hearing at labour commissions and courts, IT unions are challenging its fairness, arguing that the impacted workers merely carried out tasks they were asked to do. “If we are not workmen, then what are we?” asks Natarajan.

In July, Hyderabad’s high court asked Tech Mahindra to explain the “illegal terminations” of four employees. For Lokesh Vasana, one of the four, the high court’s notice is the first instance of validation in months. “Forget rent; my 6-month-old son has been down with dengue and my family suddenly has no health insurance”.

For the Forum of IT professionals (FITP), a city-based union that made the appeal under the Shops and Establishments Act that prohibits termination of an employee while their case is in a labour court, it’s victory.

“We are more hopeful about the 70 petitions we have filed at the labour commission,” said Kiran Chandra, the coordinator for FITP. “More people are coming forward”.