PETA history is it donated $1,500 to the North American Earth Liberation Front, a criminal organisation that the FBI calls “domestic terrorists" and in 2003 alone PETA avoided over $3.5 million in federal income taxes.

Our tie up has given below inputs from a USA based media that claims below charges against PETA as them being anti national...

Despite its warm-and-fuzzy public image, PETA has donated over $150,000 to criminal activists — including those jailed for arson, burglary, and even attempted murder.

In 2001, PETA donated $1,500 to the North American Earth Liberation Front, a criminal organisation that the FBI calls “domestic terrorists". 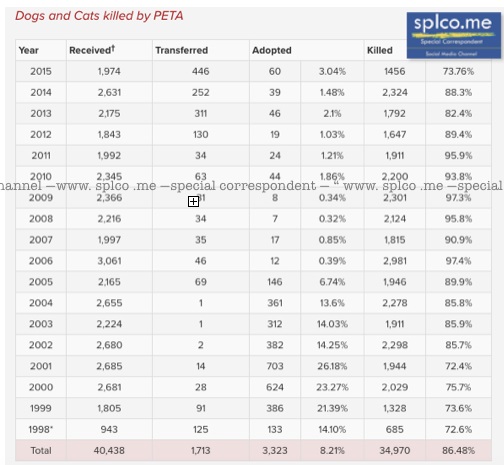 Like millions of other nonprofit groups, PETA pays no federal taxes on its income. But few of these other groups share PETA’s total disregard for the law. In 2003 alone PETA avoided over $3.5 million in federal income taxes.

This tax break amounts to a huge subsidy, and American taxpayers are footing the bill for PETA’s behaviour.

When DMK leader MK Stalin has called People for the Ethical Treatment of Animals (PETA) India as “anti-national” and to be banned...

For which PETA through its Dr Manilal Valliyate, Director of Veterinary Affairs, PETA India has responded in its website with a self certified profile which states “ Dr. Valliyate has personally witnessed jallikattu events and has nearly two decades of veterinary experience working with cattle and other large animals.”

Peta India further says “As acknowledged by the Honourable Supreme Court, jallikattu, bull races and bullfights are banned under the Environment Ministry’s 2011 prohibition on the use of bulls in performances. But they are also illegal, as are many other cruelties, under the Prevention of Cruelty to Animals (PCA) Act 1960.

And it take one step ahead and teases Tamilnadu’s Opposition Leader by saying “ If M.K.Stalin think that makes no sense, well neither do we.

Peta further continues it teasing by stating … “Article 51A(g) of the Constitution of India makes it the mandate of every Indian citizen to have compassion for animals. To stand for kindness is patriotic, to stand for cruelty is un-Indian PETA India serves animals in respect of our country’s Constitutional mandate, its laws and its Supreme Court. To target an animal protection NGO which is not a law-making body, but rather a law-abiding body, is cheap and ineffective as it can have no bearing whatsoever on the central government laws that prohibit cruelty to bulls”. 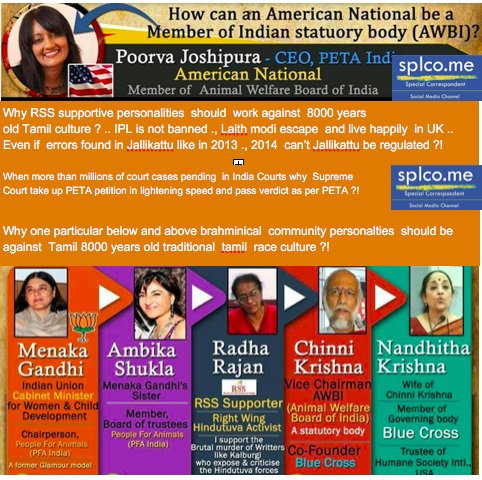 In other word PETA a private share held company with PAN and AOA tells recklessly “don’t talk to us but go and ask law makers“ to a person who is not only Leader of Opposition - a Government personal & but also Working President of a Party which is instrumental in abolishing Devadasi system that had been practised by upper caste people in the name of agamas in temples, Changed the state name to Tamilnadu, bought social justice and eradicated caste name in streets and Instrumental in central government formation in 1980, 1989, 1996, 1999, 2004, 2008 and has recently got 17 million people votes mandate in its fold, to quote figurative 17,175,374 votes in 2016 assembly elections...

May we been kindly get below details about Peta India Operations?

1) Your Company is Privately held by Shares Fund of ZERO rupees value as per Master data Company/LLP Master Data of Ministry of corporate affairs being so where you got fund from to pay legal fees for you to represent in Supreme Court?

2) How much your Ms. Poorva Josipoora Chief Executive Officer, PETA India been paid per annum as salary ? Is she been paid in INR or in US$?

3) Is you CEO is Indian Citizen if not which country passport she got?

4) Your below directors citizenship details can we been advised?
(i) HIREN NARESH KARA
(ii) PRAMODA CHITRABHANU SHAH       (iiii) MARY COLLEEN HEALEY
(iv) INGRID ELIZABETH NEWKIRK
But stoic silence as answers till now and we assure our readers to publish their response on receipt .

Has completed Applied Sciences in Thaigarajar Engineering College, Madurai and done PG Diploma in Foreign Trade and also obtained “Distinction“ in MBA from Madras university , Chennai . He Worked in UAE in International Trade for two years and then Started own business the age of 28... Due to genocide problem in Srilanka he resigned his treasurer post Indian Asean Srilanka Chamber of Commerce in 2009 . He petitioned Sailesh Gandhi , Information Commissioner who is also grandson of Mahatma Gandhi and obtained the right to obtain Information from Central goverment under 8(1)(h) of RTI act . He has urge for writing and thanks to the advice from his friends founded splco.me a social media channel. He has interests in Aquarium , Organic Agriculture and reading.