Sources of RSS disclose Swamy known for his blackmail tactics has got 32 Crores of Money from Sasikala camp for his voice of support...

Subramaniya Swamy who joined BJP after dissolving his Janatha party only in 2014, is known for his hatred towards Arun Jetli Finance minister, now threatened the BJP appointed constitution authority Tamilnadu Governor publicly and also went in to the extreme of Supporting Edapadi palanismy whose close family member been caught for converting old currency in to new currency and also been arrested for having possession of 6 crores then restricted 2000 Rs Pink Currency.

During 1996 he filled case against Misappropriate 66 crores wealth case against Jayalalitha and during 1998 he not only joined with jayalalithaa and become MP after getting her support but also along with Jayalalitha he toppled 13 month old BJP Vajapaye Government. 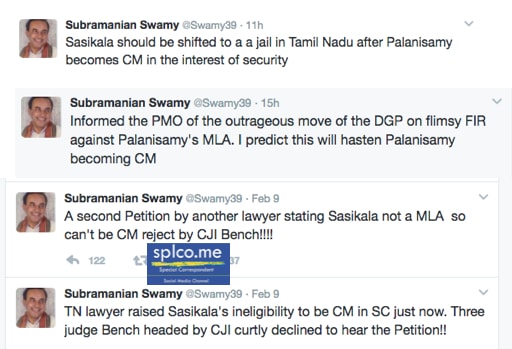 Swamy who claims as a strong RSS follower who often boost about his wealth case against Jayalalitha and Sasikala , however the judgement says this case is only between Karnataka government and Mr.Anbalagan - DMK General Sectetary Vrs Jaylalithaa and her 33 years close aide Sasikala .

However the support of Swamy to sasikala did not raise any eyebrows in tamilnadu political circles thanks to his monkey like political stunts . Swamy Supported Khalistan movement and LTTE movement and indicted by Jain commission and still he can’t answer the questions regarding whereabouts asked by his then Party leader Thiruchi Veluchami on the date of murder of Rajiv Gandhi in 1991.

But then Congress President Ms.Sonia Gandhi rejected the plan of now convicted Criminal Jayalalitha and Swamy ’s design that turned out to be breaking point of Mr.Swamy relation with congress and from then indulge in hate politics against congress for his self interest .

Swami association with IIT Chennai also ended up with arbitration where Senior Counsel in Chennai High Court had told us of filling a case against Subramaniya Swamy for looting tax payer money in the near future.

Subramaniya Swamy been found teased / ridiculed by students in Tamilnadu on Marina and all the parts of the state agitation for Jallikattu and also now he been addressed as by “porki “ by tamils in social media as a retaliation measure for his hatred and constant usage of this word against Tamil students.