How Karnataka legislators escaped disqualification using the letter that speaks "In the interest of the State and the people of Karnataka I hereby express my lack of confidence in the government headed by Shri B.S. Yeddyurappa and…

Published on February 17th, 2017 by in Questions

Question : Can Sasikala who is interim General secretary sack the party Treasurer and Party Forum President ?!

In the absence of the General Secretary , the above two parts post assumes significance . Already the Interim General Secretary Post held by Sasikala is been Questioned in the courts and the case is been conducted . Adding to this today Election commission has send notice based on the complaints from ADMK MP who invoked ADMK Party bye law ( RULE 43) that exposes the loop hole in Sasikala appointment. 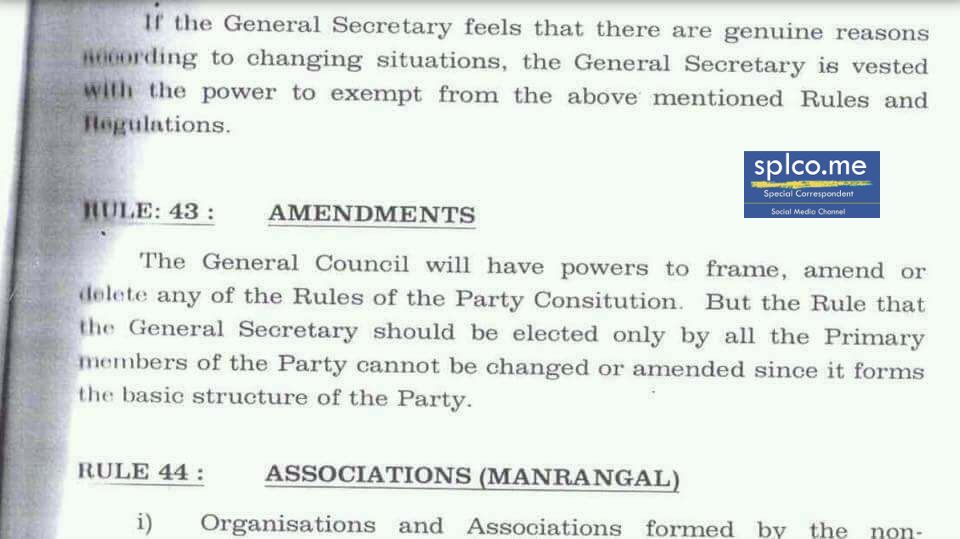 Question : Did not Anti defection Law applies here as per the Mr.Sengotaiyan open threat to vote MLAs in favour of Edapadi Palani samy holds good ?!

By removing Edapadi Palanisamy from ADMK party already O.Pannir Selvam camp has created legal shocks for Sasikala faction . Now being the case the ADMK Whip even if he issues order favour of a person whois not party member then this can be Questioned under the the Rule of Law.

Also case reference Writ Petition (Civil) No.32660-32670 of 2010, in that the order of the Karnataka Speaker dated 10th October, 2010, disqualifying the Appellants ( 13 MLAs) from the membership of the House under paragraph 2(1)(a) of the Tenth Schedule to the Constitution is set aside can also been taken in to consideration in favour of O.P.S Camp..

The Appointment of House Leader of Mr. Sengotaiyan by the Sasikala camp can also be questioned by OPS camp . when being the case his threat can’t assume the importance.

The contents of one of the Legislators letters dated 6th October, 2010, reproduced hereinbelow:

"His Excellency, I was elected as an MLA on BJP ticket.I being an MLA of the BJP got disillusioned with the functioning of the Government headed by Shri B.S.Yeddyurappa. There have been widespread corruption, nepotism, favouritism, abuse of power, misusing of government machinery in the functioning of the government headed by Chief Minister Shri B.S.Yeddyurappa and a situation has arisen that the governance of the State cannot be carried on in accordance with the provisions of the Constitution and Shri Yeddyurappa as Chief Minister has forfeited the confidence of the people.

With regards, I remain Yours faithfully, Issued to Shri H.R. Bharadwaj, His Excellency Governor of Karnataka, Raj Bhavan, Bangalore."

This letter expresses the right of selection / rejection of legislators been accepted by supreme court ( Ref case CIVIL APPEAL NOs.4444-4476 OF 2011) recalling paragraph 5 of the Tenth Schedule, which was introduced into the Constitution by the Fifty-second Amendment Act, 1985, to deal with the immorality of defection.

Your Voice Via splco.me...